pennywisealfie said:
I play goalkeeper and I will do anything I can at all to put the other team off if I think it will work. We won on pens once and I saved three, on each occasion when I saved them, I screamed in the pen takers face afterwards. I'm never one to rub it in, but I wanted to intimidate their teammates and it worked, they walked up to the spot looking scared.
Click to expand...

I guess the one positive for Australia is that European winners of the World Cup tend to bow out in the group stages the following World Cup.

Germany in 2018 were the third team in a row to bow out in the group stages so hopefully the curse continues.

France haven't been as good as they were in that 2018 World Cup. IIRC they have only won two games this year.

If the curse continues, and that's a big if, I fancy our chances of making it to the knockout stages if we play like we want to make it.

For mine, the problem isn't so much our lack of strike. The problem is I get the feeling there just isn't much interest in trying to advance beyond the group stages of a World Cup. We're happy enough to get there and just treat these competitions as like a holiday. They have kept the appearance streak alive, they are happy just to be there on the world stage. We still get paid for just being there. 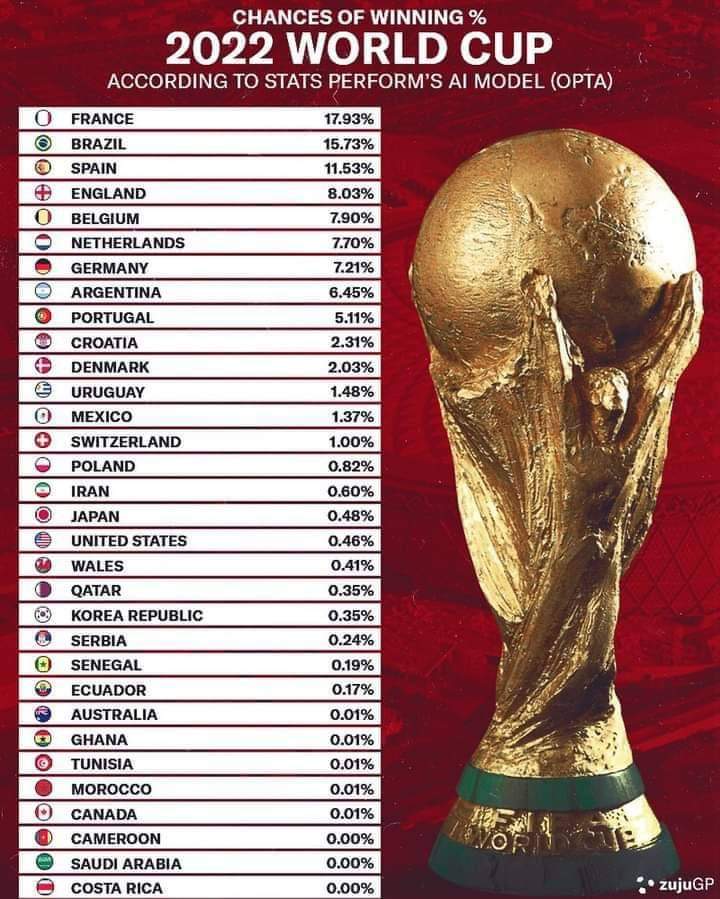 Netherlands with a 7.70% chance. I like those odds. Would be a very happy man if I could witness them winning a WC in my life time. So would my Grandad. 2010 was heartbreaking.

Surprised Netherlands are even 7%, they are nowhere the team they used to be.

They just lost to Linfield, a shitty irish team.

Qatar fell to a shock 1-0 defeat to Irish League champions Linfield as they continue their preparations for hosting this winter’s World Cup.

... and 10 more.
Total: 46 (members: 30, guests: 16)
Robots: 138
Top
AdBlock Message
Please consider adding BHQ to your Adblock Whitelist. We do our best to make sure it doesn't affect your experience on the website, and the funds help us pay server and software costs.