Unbreakable said:
Yeah, it's an issue with their site at the moment - their security certificate ran out a few days ago, and for whatever reason they haven't renewed it.

I've found it's impossible to get on to the site through the regular web browser on my phone, easiest way around it (if you're only using a phone / tablet) would be to use Google Chrome or Safari web browser, with those you should be able to click "advanced" and then "proceed to site anyway" or something along those lines. There's no actual security risk.
Click to expand...

So my computer is really slow (shut up). It shouldn't be. Not this slow. It started happening when I uninstalled a legit version of some design software (as the subscription was being paid for by my old work), and installed... an acquired version. It may have just been a co-incidence, but the original was lightning quick (like 2-3 second startup), the new one literally 30-40 seconds and slows the whole computer down with it. It's not just that program now though, it's the whole system. It takes a good 1-2 minutes to start up, whereas before, with my old gear that was literally only 1/4 to 1/5th the performance, it was 10 - 15 seconds.

The weird thing is that it's not sucking CPU or Ram resources, it seems to be the HDD that is the choke point. They're SSD's, but cheap ones (Crucial BX 480gb). The read/write speed seems to be fine, but whenever I start a program up or do something that requires some processing, the C drive just maxes out. For a long time. See screenshot: 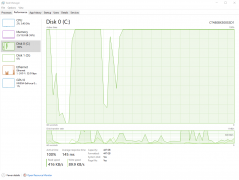 Is it normal for this? Most of the time it's only light read/write, but the actual "usage" is maxed the **** out. Strangely, on Task Manager, even when the HDD is maxed out, it doesn't show what is actually chugging it (see below - I assume 50% usage is because I have two drives on there and C drive is at 100%). This shot was taken just when opening Windows Settings. 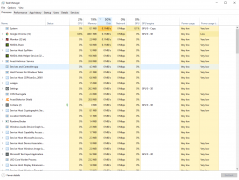 1) Is it normal for the HDD to be at max usage at these times?

2) Should an SSD, even a cheap one, be that fucking slow to be the choke point on a system?

4) Even though I think it's just a coincidence, could my less-than-legit program be messing with the system (even when not running this software package likes to have background shit going on) and should I uninstall it to see if that's what's doing it?

5) Should I buy a better SSD for the startup drive? It won't necessarily need to be bigger, sits at around 60-70% capacity.

Lets move this to messenger and get our nerd involved once he's awoken.

Lets move this to messenger and get our nerd involved once he's awoken.
Click to expand...

He's an early riser these days. Usually up by 9am.

Harry Sack said:
He's an early riser these days. Usually up by 9am.
Click to expand...

He's been working pretty hard, he certainly deserves a sleep-in.

Well I’m switching back to Intel.

I’m done with AMD. It’s been nothing but problems the past few months.

I’m done with AMD. It’s been nothing but problems the past few months.
Click to expand...

Such as? What CPU did you end up getting again?

Harry Sack said:
Such as? What CPU did you end up getting again?

Also 7 months with my 3700X also stable also only pubg crashes. What a coincidence

Kimlo said:
Also 7 months with my 3700X also stable also only pubg crashes. What a coincidence
Click to expand...

The four of us have all been solid really. It was the previous gen Ryzen's that were a bit temperamental I think.