It will be interesting to see who they intend to sign with his money ?

jarro65 said:
It will be interesting to see who they intend to sign with his money ?

And maybe Cam Smith if he takes a pay cut.

Yeh last Friday night when he sooked over a perfectly legal tackle by Joffa must have made him realise afterwards he's just too old for the rough and tumble of NRL.

Good luck to him in the future. Please don't spoil such a great legacy with anymore of those sooks Cooper.

Roosters saw the Rabbits do it, couldn't be outdone by this legal salary cap rort.

Nashy said:
Roosters saw the Rabbits do it, couldn't be outdone by this legal salary cap rort.
Click to expand...

Welp, the roosters will go back to back as cooper has just secured this years fairytale token.

Didn't to want keep being embarrassed by Dearden

He's too soft for the game now, should take up poetry in retirement.

Announced it after a loss expecting the NRL to hand them a fairytale for the rest of the year?

And just like that Cronk's salary jumps from $600k to $1 million plus.

They can probably afford our entire front row now.

Was hoping he went around for one more season, now they’ve got that cash to snake a player or two.

Some will be used on Latrell you would think. He's off-contract end of this year.

The rorters' random drug testing regiment is about to become more rigorous and frequent.

Amazing player and a very good career. The Scums salary cap scandal drags it down a fair bit. Not quite as good as the likes of Locky and Langer but still pretty up there.

Cronk deserves all the accolades and fortune he has amassed throughout his career. He wasn't the most naturally gifted footballer and has had to work damn hard to get to where he is now. Congratulations Cooper..... I wish you well.

That said, I don't think he would have been anything other than an average footballer, if it weren't for Craig Bellamy and Cameron Smith. 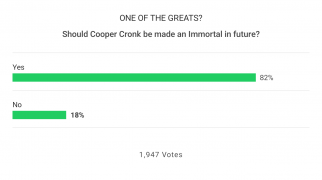 I don't know - he wasn't really a once in a generation player... in the QLD team he wasn't as good as Thurston or Smith.

God, it'd be a farce if Darren isn't the next Immortal.

I don't know - he wasn't really a once in a generation player... in the QLD team he wasn't as good as Thurston or Smith.

God, it'd be a farce if Darren isn't the next Immortal.
Click to expand...

While he has achieved arguably more than some of those Immortals - premierships at multiple clubs, part of the QLD golden age, now has some grand final folklore to go with it etc, I think there’s an intangible quality or aura about certain players that put them in that higher echelon. They’re also players that defined or dominated a position, when they got the ball, you sat up and took notice. If you played against them, it’s a matter of when, not if, they’d make you look like you’re playing a different game to them. At least that’s what I feel it should be.

So Cronk, while a fantastic player, isn’t one of those guys. He is however, one of the best examples of hard work and application. You may not be as naturally talented, but you can still achieve greatness.

Having said all that, Johns is the only one I actually saw play, and his position there is still debatable in some regards, or at least the recency of it. I’m sure there are better judges on here though