NSW come into Brisbane on the back of a 14 - 6 victory in Sydney. Despite consistently making errors with the ball, the more eager Blues got the jump on us. The NSW pack were more aggressive and for most of the game seemed more likely to get the better of their Northern rivals. This of course culminated in the first half with Paul Gallen abruptly punching Nate Myles in the face repeatedly for retaliating to Gallen smashing his forearm into him when he was already restrained in the tackle. This was justified by Gallen due to Myles allegedly twisting legs in tackles, something there is no evidence of, and leading with his head in hit ups, which leads to concussions for players with piss poor tackling techniques. Also, our halves played like a busted arse which meant we struggled to make things happen in attack.

In the three weeks since the big four have hit their straps, so I expect to see us put a lot more points on the board, particularly since the game is in Brisbane. That means NSW will have to hold onto the ball and if the conditions at Suncorp are still all juicy and moist, they might struggle in comparison to us since our playmakers shit all over theirs.

Anyway I'm tipping Queensland. We'll win comfortably up here but balls it up in Sydney when we're too complacent and they have the whole '7 years without a win' shame to motivate them. Should be a good game anyway.

I'm pretty damn confident about this. No way will they play badly in front of their home crowd, it just wouldn't be forgiven. I think the side is better than it was in Game 1 (especially the bench), and I still think that was superior to NSW's if they both played at their best. Ashley Harrison is unlucky to be dropped, but he's been kinda ordinary since last year, maybe he's close to retirement. He's been a great servant for QLD though, and I wouldn't have a problem if they played him until he retired instead of McQueen or something.
S

Qld should get the chocolates unless NSW have got an ambush in mind.

I can't see how their disrupted preparation will help and Hayne is a big loss.

I wish the bickering would stop. NSW having a cry to the NRL about Myles, now Mal amking cheat calls. How about we all stfu and prepare for a game of footy. It's just childish.
V

If we play like we did in game 1 I will be very perplexed.

I like what NSW are doing by going out and walking the streets of Brisbane to get the fact that we are in enemy territory and everyone hates into their heads.

They should go for a walk through Inala then ;)

I don't even think I care. QLD should win but I feel like the tide has changed.

Bucking Beads said:
I don't even think I care. QLD should win but I feel like the tide has changed.
Click to expand...

You're right after all, dislikes should be available for posts like this... :001_tt2:
1

Blues' bus broke down in the middle of the road.

Imagine if NSW somehow got the clearence to drive down Caxton Street before the game then it broke down? Pretty sure that would be a nightmare for the coppers :laugh:

Scotty said:
Imagine if NSW somehow got the clearence to drive down Caxton Street before the game then it broke down? Pretty sure that would be a nightmare for the coppers :laugh:
Click to expand...

Imagine the NSW'kers having to walk through the crowd, being pelted with rotten eggs, fruit and veg, until Gallen loses his cool again and takes a swing at a maroons supporter, causing the crowd uproar and frenzy, swallowing all the blues players, for them never to be seen again!
The next day, all that would remain would be small baby blue fibers being blown along Caxton street by the wind...

P.S. I may or may not have been watching too much Spartacus lately... :cuckoo:

If I had my way I would make the Blues go past the Caxton and park the bus in the middle of the road and show them how much we are hated here for motivation.

The more bickering the better! More evidence that Qld was hard done by in Game 1. This is the photo that NSW were using to say that Qld defenders were constantly off-side. I have drawn over the 10 metre lines with blue, and the play-the-ball / refs defensive line with pink. Conclusion? Looks to me like on half of the rucks, the ref is keeping Qld 12 - 14 metres back. And everyone wonders why NSW had so much more 'energy'. 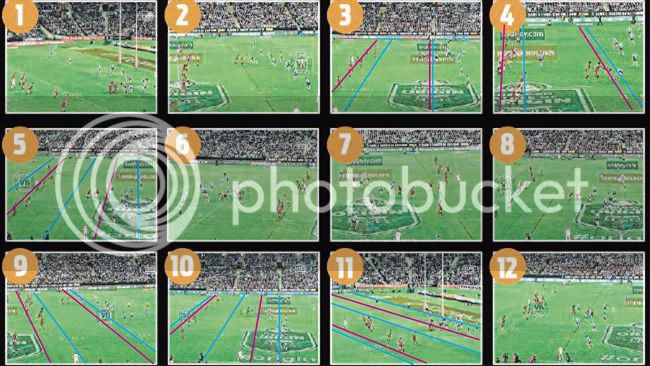 Browny said:
They should go for a walk through Inala then ;)
Click to expand...

Or even worse, D Bay

I commented on that in the post game thread the next day [MENTION=8215]Morkel[/MENTION].

You should've done the same for the blues 10 mtrs, who were the ones quite often offside.
Mal may be labelled a whinger, but he is absolutely spot on!

Porthoz said:
I commented on that in the post game thread the next day @Morkel.

You should've done the same for the blues 10 mtrs, who were the ones quite often offside.
Mal may be labelled a whinger, but he is absolutely spot on!
Click to expand...

Yeah I was bitching about the same stuff during the Broncos vs Warriors & Broncos vs Bulldogs games. I can't be f'd doing screen grabs of the video though. Was very happy to use NSW's researched images against them though.

LOL thank god I had this article and Mal's comments here bookmarked.