So pretty much a copy of Gould's article. I wonder if he even has independant thoughts anymore.

McHunt said:
You saw that when Brodie Croft got hooked when Melbourne were up 26-0. Who hooks a halfback when they are 26-0 up? A coach that holds his players to account, win, lose or draw. That’s who.
Click to expand...

He has a point there: when is Seibold going to hook Boyd?

Secondly, you have just copied what every other article has said

Thirdly, it is clear Seibold that he was talking about changing the culture, which is exactly what needs to happen.

I'm happy to have people come out in the media and tear strips off the Broncos......

.... but can they do it for the actual things that are going bad for them.

This one throw away from Seibold is not the worst thing about the Broncos on Friday night ffs. Get the knives out for the right reasons. fml.

Whenever I listen to Tallis saying his usual garbage, I remember when I used to live over at Straddie and occasionally see him at the burger joint around the corner. He was always sloshed off his head and thought that pretending to give his toddler a drink of his booze was peak comedy.

Seibold should get advice from Wayne on how to handle losing post pressers.

If not, he is going to run out of excuses and possibly get his contract torn up.

**** off Gorden, even when you're right you still manage to be wrong.

How are your boys down the road going Gordon ... maybe worry about them before sticking your nose where it doesn't belong

Tom said:
So pretty much a copy of Gould's article. I wonder if he even has independant thoughts anymore.
Click to expand...

These "experts or legends of the game" are justing fucking parrots. They just repeat the same bullshit.

Gordie is too thick to realize that Seibold could not have possibly been pointing the finger at his cohort of players who were always competitive and in fact regularly competed with and defeated the storm. He was talking about the culture that has developed within the club in the last ten years and it is that culture that needs to be re-addressed.

It is just another opportunity for Gordie to talk about himself and put shit on Seibold.

And coach Anthony Seibold approached the loss as if it was a fait accompli that his side would lose, saying in his post-match press conference: “For 10 years the Storm have lapped this club. They’re at a way different part of their journey, but we need to get better.”

But an attitude from a coach that expects to lose to another side, does nothing to help his team, looking to buck a historical trend, according to Michael Ennis.

“The fact that he started referring to stuff that had happened for the last decade, sure Melbourne have had a great record against Brisbane, but he’s come in and it’s his job to change that,” Ennis told the panel on Fox League’s Big League Wrap.
“It’s his job to focus on that, it sounded to me throughout his press conference that they almost expected that result and that they were happy to move forward.
“Yes, they’d address it and look at it and why they’d failed, but the fact that ten, twelve years of pain almost made it acceptable that that’s just what Melbourne do to Brisbane.
“And you can’t be setting the standard as your coach.
“If he’s thinking that or that’s part of his conversation, he’s almost thinking through the week that Melbourne will beat them and beat them well.
“They absolutely towelled them up. I think he’s got to have a real good look at his key positions in his spine.”

After a couple of weeks where they had built up a good run of form, the Broncos felt the backlash of the Storm following their loss to Manly.
40-4. It was a complete carve-up and the Broncos coach Anthony Seibold said that the game symbolised where Brisbane were placed.

Ennis isn’t entirely wrong but he is quoting Seibold out of context. Seibold is changing the culture that has led to basically 13 years of defeat against the Storm and that isn’t going to happen overnight, despite how much the media might want to talk about it.

Jason Simmons said:
Ennis isn’t entirely wrong but he is quoting Seibold out of context. Seibold is changing the culture that has led to basically 13 years of defeat against the Storm and that isn’t going to happen overnight, despite how much the media might want to talk about it.
Click to expand...

That’s all these clowns do, and none of the other ‘reporters’ every offer a different point of view so it is just an echo chamber as they pat each other on the back.

I mean think about how ridiculous that is, each issue never has a different POV from anyone. You couldn’t get 10 people to agree that the sky is blue yet in Rugby League apparently everyone agrees and everyone is always right. Amazing. 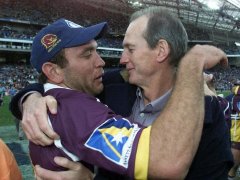 Jason Simmons said:
Ennis isn’t entirely wrong but he is quoting Seibold out of context. Seibold is changing the culture that has led to basically 13 years of defeat against the Storm and that isn’t going to happen overnight, despite how much the media might want to talk about it.
Click to expand...

Ennis doesn't work for the club, so it's not his job to give Seibold the benefit of the doubt. Seibold's been at the club for one year, and the results have been poor. The Broncos were widely tipped to be much better than this. Any time a team tipped for the top 4 pre-season plays this poorly the coach is going to get criticism.

By all means have faith in Seibold, but outside criticism of his coaching is entirely fair as there isn't any hard evidence that he's turning anything around yet. Gorden Tallis is a tool that Ennis no doubt begrudges sharing a conclusion with, but that tooldom doesn't invalidate every overlapping critical opinion.

How are the titans travelling, Gorden?
Worry about your own backyard, ya has been.
Last edited: Aug 5, 2019