Caniffe said:
If we’d have won the GF, he would have been the messiah given his performance that year. Maybe he’s just had rubbish coaching too?

He needs to step up but but saying he’s failed is a bit far. Too expensive? Yes. Terrible signing? No. Your alternative would have been Hunt and Taylor - hows that working out...
Click to expand...

Right now Hunt would objectively be more useful for us.

We already have Croft and Dearden and what we desperately lack is a top shelf Dummy Half.

For whatever can rightly be said about Hunt and his limitations as a Halfback, he's actually quite a good Dummy Half and that's just in a part time capacity. If he was to take the role on full time I think he could definitely be one of the top couple of Dummy Half's in the game today.
Last edited: Jun 29, 2020
K

Offer Marshal a low money contract get him teaching our halves the proper way.

kooly87 said:
Right now Hunt would objectively be more useful for us.
Click to expand...

Hunt used to be a good defender but I'm not 100% sure he's still got it. He's getting bounced a lot more at St George but he is going a bit better with that after playing in the middle again. The most important attribute Hunt provided back in 2015 was 11,332 kick metres (compared to 2nd in that stat: JT with 7,403m). In 2015 he was also a handy defender and runner. I'd still take him back.
Last edited: Jun 29, 2020
J

Waynesaurus said:
Its the forwards that are killing us, big slow hitups, average meters, slow play the balls, we are not generating anywhere near enough momentum so the halves cant get a look in. When we have tried to spread it wide we haven't created anywhere near enough space for our backs so the rushing defense is always on top of them.

Everything is now feeding from getting that the roll on, territory, 6 agains, penalties it all feeds from that quick play. Using big blokes for one out hitups 4 out of the 6 tackles particularly considering their numbers are so bad is suicide, the TItans were gang tackling us with 3 in the tackle all night.

Seibs needs to have a good hard rethink and try some different ways to start generating that momentum.
Click to expand...

It won’t help any thing in defence but at least help with some sought of attack .
I agree with the team need to be running on to the ball more after a quick play the ball standing a bit deeper will help this
Croft and Milford need to get the ball at first receiver more deeper run a few metres then make a decision pass / run with the edge forwards running decoys or lines this will create space out wide.
Milford needs to get his hand on the ball on every set even running on the same side as Croft .
Thurston had the ball at least once or twice every set.
No passion no pride no urgency.
They need to get angry like take a game personally FFS.
No talk or leaders telling the team how it is , like getting up the forwards or backs not marking up or just getting fired up after a shitty ref call.
you just wonder what is Seibold doing all week it can’t all be stats and numbers and video replays.

Defence they need to rush the defence in a line put more pressure on the attacking team.
Forward pack need hunt as a team
Run forwards ethier side of the ruck.
Instead of the one out shit .... run as a pack
They get slammed poor Hass at the moment is getting gang tackled atm.
Ok rant over ...........
I don’t have all the answers and I’m no coach but from a fan point of view this is what I feeling frustrated and angry
The talent is there .....

Sproj said:
No one says he’s great, no one even thinks he’s been good, he hasn’t but he is on a bucketload less than his halves partner who is somehow going even worse.
Click to expand...

This season is a write-off. Replace Croft with Dearden, fast track Dearden's development. Shop Croft around to other clubs.
Last edited: Jul 2, 2020
T

Found a hilarious news article. Based around the attitude between a successful club culture and ours, Jai Field was chipped for not being up to Eels standards, instead of sooking (to quote Brad Arthur) but he didn't, he manned up and put in the work. Lets see how he goes this weekend, and if he's good, lets steal his attitude and put it on our halves.

Reminds me of that story about George Best lying in a bedfull of cash and a Miss Universe candidate....roomservice comes in and asks "Where did it all go wrong George..?"

If things were different last year and lets say that SoS and Dearden didnt get injured i think the debate about our halves this season would have been quite different.

Can i ask, if anyones bothered, go back and watch before Croft went off injured against Souths in round 2. Watch closely the combos he and Turps were running with each other.

Much to my frustration, not seen it since....so dunno if its something we can look to build upon or it was just a one off.....wish i knew the answer...but green shoots of hope.

Dearden simply wasnt deemed ready to lead a NRL team around the field this year; thats why Croft came in. Was that atcually the right call? Dunno yet....before they are both off contract though im sure we will work that one out....

That's funny because I blame the blokes playing inside Oates (who receive the ball first and are paid a lot more) for his lack of confidence. At least we agree on one player.
Last edited: Jul 2, 2020

Milford very happy that we are 8 up during a training run, wonder how quickly that smile went when we went down 50-8. 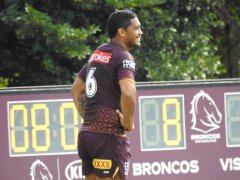 GCBRONCO said:
Milford very happy that we are 8 up during a training run, wonder how quickly that smile went when we went down 50-8.

I’d be smiling too if I was getting paid almost $20k / week.

JAHHW said:
I’d be smiling too if I was getting paid almost $20k / week.
Click to expand...

It is actually nice just to see him smiling, hopefully that means a better performance this weekend.

lynx000 said:
It is actually nice just to see him smiling, hopefully that means a better performance this weekend.
Click to expand...

Not a dig at you but - jings this is what it's come to eh. We're all garnering solace just from a player smiling and hoping it's a portend to him having a great game. Other clubs read about their forwards absolutely tearing into each other at training and feel satisfied that they're ready to go. At the Broncos at present we're hanging our hat on our million dollar 5/8 smiling!

How the mighty have fallen.

Jedhead said:
Not a dig at you but - jings this is what it's come to eh. We're all garnering solace just from a player smiling and hoping it's a portend to him having a great game. Other clubs read about their forwards absolutely tearing into each other at training and feel satisfied that they're ready to go. At the Broncos at present we're hanging our hat on our million dollar 5/8 smiling!

I agree, but I will take that over him looking he is in deep clinical depression and about to suffer a complete meltdown.